‘King Chaos sets a cracking pace right from the start and never lets up. All (the cast) are excellent and clearly having fun – their enjoyment is infectious.’ Camden Fringe Voyeur

‘The small cast of four very contrasting characters are an absolute delight to watch.’ A Younger Theatre

‘Cliff Chapman as CEO Jeremiah Baptiste (a cross between General Melchett in Blackadder Goes Forth and Jay in The Inbetweeners) brought a requisite joie de vivre to the proceedings.’ FemaleArts * * * *

‘The snappy interactions between Chapman and Joselyn bring a great atmosphere to the play.’ Remote Goat * * * *

‘It’s all pulled off with a bat-on-caffeine-binge energy… In the script, it’s not what is said as much as it is left unsaid that really hits home. This is in no small part thanks to Chapman and Joselyn, who once again carry the comedy and characterisation off flawlessly. The pair continually push their characters’ believability to breaking point in search of a laugh, but always know when to pull back… It’s a classic contrast and one that the pair, all bluster and wide eyes respectively, work beautifully. As ever, if on TV… their pairing I suspect would be seen as one of the greats… any time spent with these characters is a joy, regardless of what’s going on.’ Views From The Gods * * * * 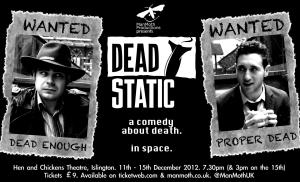 ‘Dead Static is a really nice piece of small theatre, performed with considerable ability… The bravado and intensity of Chapman juxtaposed with the feckless apathy of Joselyn is the real success of this play… steady strong performances… Confident acting here… The anger and frustration portrayed by Chapman was arrogantly brilliant… the actors did an excellent job of portraying the morales and fears of both characters… it really is quite a splendidly thoughtful and hilarious production.’  James Bacon, Forbidden Planet International 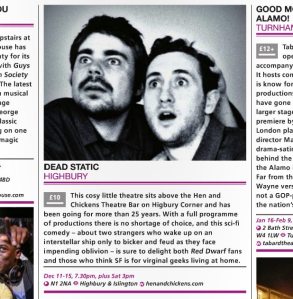 ‘Cliff Chapman as Tyler and Adam Joselyn as Gary are two excellent clowns in what is… certainly even funnier a space comedy than Red Dwarf.’ Snipe London

‘When done well, like this piece… epistolary storytelling can be quite effective. I’ve also seen it done badly, but not this time. What makes it work is the strength of the narrative voice… which is carried well, indeed, enhanced by Cliff Chapman’s reading.’ Mimetic Declination 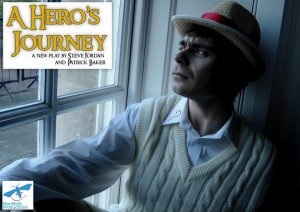 ‘There is a feisty performance from Ellen Gallagher… and a delightful one from Chapman as the phantom Dr Who.’ Howard Loxton, The British Theatre Guide

‘Armand Duval (Cliff Chapman), is also a challenging role. The French nobleman successfully woos Camille and must portray an emotional intensity and purity that stands out from the pretentious world inhabited by Camille and her cohorts. He captured Armand’s passion and his rather naive, but touching, love for Camille very convincingly.’ Melanie Wright, IOM Today

For Nicola Bryant: “I really liked the host/interviewer, Cliff Chapman, too. It was his first gig for Misty Moon, and I’ll be surprised if it’s his last. Obviously a huge Doctor Who fan, he had the facts in his head, some decent questions and a self-deprecating sense of humour.”

For Sophie Aldred: “Host Cliff Chapman took Sophie step by step through her Doctor Who career… Cliff did a fine job, and Sophie was as great as ever, chatting for two hours that flew by. An Ace night in every sense.” ‘MinkyKnights”, Gallifrey Base Forum

‘You utter bastard, sir! You made me cry! Seriously great reading. There’s a subtle sensitivity you lend to the funeral scene, for example, that’s pitch perfect. Great Sasquatch voice too – hope that didn’t wreck your throat. But in short, brilliantly done. I’ll be more than happy to recommend your services to other authors!’ Simon Forward, Author

‘Cliff recently produced three pieces of audio work for me. I originally asked him to do just one, entitled Gary Plays for Man United – a challenging monologue about a man who abuses his female partner. He performed it brilliantly, and it was exactly what I imagined it could be – but also he added extra elements so that the character instantly became more rounded and three-dimensional. Cliff also added sound effects which added to the atmosphere. Cliff has an excellent sense of timing which meant that the play build gradually to a climax, serving to maximise the dramatic impact. Cliff was able to record, edit and return to me a final version within just a day – I was extremely impressed with the turnaround.

I was so pleased with Cliff’s work, that I then asked him to produce 2 further plays – Spellbound and Lost That Loving Feeling, for which he used his actress contacts to perform each of the monologues. Again, I was extremely impressed by the standard of the acting, the production and the turnaround.

I would recommend Cliff’s services to other budding writers out there – he helped make my work come alive!’ Steve Maggs, Writer

‘I first asked Cliff to put together some introduction pieces for my radio show back in 2012, these worked really well so I invited him to come up with some more jingles and stingers that I could use during my show. His approach to work is excellent, showing real professionalism, he asked open questions to understand exactly what I wanted (at the time of talking, I didn’t really know what I wanted), he made some useful suggestions that we ended up going with. The results are absolutely wonderful, I am now looking forward to using the new material in future radio shows, thanks Cliff, you’re a star !!’ Steve Muscutt, Producer, The Listening Post www. musicmuso.com

‘Cliff is an extremely talented, versatile actor and a consummate professional. Having directed and worked with Cliff on numerous ManMoth theatre and film projects, I can say with total confidence that he’s incredibly hard working, reliable, enthusiastic and knows his craft inside out. Cliff’s an asset to any team, full of intelligent ideas and a great person to work with.’ Steve Jordan, Writer/Director,  ManMoth Productions/Bad Bat Productions

‘Cliff Chapman is an extremely hard working actor [who] brought so many ideas to the table about his character. On set, he was always punctual and willing to try things, including some mild stunts, he committed himself to everything… Cliff was always at ease with all members of cast & crew and was a very likeable member of the team. He is a very easy man to direct as he picks things up very easily and works hard on perfecting them. As a man, I respect Cliff as he is a hard working individual… If you want a strong performer, likeable and professional person, Cliff Chapman is your man.’ Dominic Ryan Writer/Director, The Christmas Party

Doctor Who: Blood on Santa’s Claw & Other Stories